Canaan Creative is one of the leading Chinese crypto mining giant. It has now announced the terms for its upcoming US IPO set to happen before the end of the month.

The announcement was made by Renaissance Capital on the 13th of November 2019. Renaissance Capital stated that Canaan Creative, a major Chinese Bitcoin mining stable plans to raise a total of $100 million through an IPO. They will provide 10 million ADS – American depositary shares at a price that would range from $9 to $11.

This is a move that will place the general market value of the firm at some $1.6 billion. The enterprise value of the company will go to $1.4 billion as a result of the move. It is important to note that an American Depositary Shares is an equity share of any foreign-based firm and it is US Dollar-denominated. They can be bought on the American stock exchange.

It Will Be The First SEC Filling For Canaan Creative

Barely a month ago, Canaan Creative filed with the US SEC (Securities and Exchange Commission) for an IPO that was meant to raise up to $400 million. The company has plans to be listed on the Nasdaq under the ticker named CAN. Should the BTC mining firm succeed in this project, then it would become the first China-based mining company to see public trading in the whole of America.

Canaan just recently revealed its third quarter net profit of $13 million. This is part of its registration to carry out an Initial Public Offering. In the first nine months of 2019, the company managed to generate a revenue of more than $134 million. However, there are certain weaker performances that were seen early on. This resulted in a total comprehensive income loss of about $31 million. 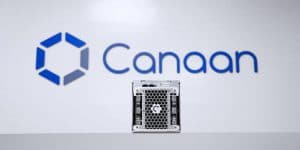 One Of The Leading Mining Giants In China

Canaan Creative is among the three leading mining giants in China. The other two are Yibang International and Bitmain. The other two tried to introduce an IPO in China and Hong Kong respectively. The projects, however, did not succeed after the regulators pored over their model of business as well as the financial outlook. Bitmain, for instance, enjoys 75% market share of the whole cryptocurrency hardware market all over the world. It has also tried to finish up an IPO.

Bitmain launched what it claimed to be the largest BTC mining facility in Rockdale, Texas in October. The supposedly world’s largest BTC mining facility was completed after collaboration with DMG Blockchain Solutions and the Rockdale Municipal Development District. Not so much has been happening on the side of Yibang International, which has been in the market for some time.