BTC City, the largest shopping center in Slovenia has developed strategies to help it become a ‘Genuine Bitcoin City.’ The city is located in Ljubljana and sits on a 475,000 square meters land. With over 500 shops, a shopping mall and an entertainment center among other facilities, the city is one of the largest towns of its kind in Europe.

The Prime Minister’s Visit And Its Significance

On Friday, Slovenia’s Prime Minister Miro Cerar visited BTC city and got a chance to learn about the town’s Bitcoin strategy. He was in the city for the opening of the Beyond 4.0 International Conference. The summit will be discussing digital society and blockchain technology. 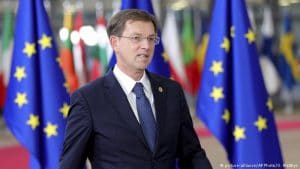 Fintech startup Eligma has been on the forefront in making the town ‘Genuine Bitcoin City.’ The company has developed a ‘point-of-sale’ payment that businesses in the city are using in an attempt to assist the town to realize its goal. The Finnish tech firm sees the BTC city as a shopping complex that uses the latest technological innovations such as blockchain, Artificial Intelligence, and Cryptocurrencies.

While in the company of the country’s State SectretaryTadej Slapkin, the two leaders used Bitcoin to buy coffee. This was a major boost for the city as it gives investors and other businesses in the area confidence in the effectiveness of this payment method. The transaction was done on Elipay system. This was the first transaction on the wallet in the city.

The History Of BTC City

BTC started as a warehouse and logistic enterprise in 1954. With time, more warehouses were added in the city. In 1990, the town transformed to become a commercial shopping area and the name BTC City was introduced. Since then, the town has experienced an increase in business with the opening of a hotel, sports complex, and a water park among other facilities. The city is home to the country’s tallest building, the crystal palace office park.

Why Conversion To A ‘Genuine Bitcoin City’ Is Important

The city will become the first one in the world to allow visitors, consumers, and entrepreneurs to use the latest technological developments such as blockchain, virtual reality, and Cryptocurrencies among others to do business.

The new development will enhance the creation of an open society that gives individuals a chance to pursue their missions and fulfill their dreams. It will also allow for the development of businesses in line with the needs of its owners.

Several businesses in the city have already installed Eligma’s Elipay. The city also has Cryptocurrency ATMs. Visitors and businesses as well can benefit from the Blockchain Think Tank located at the premises.

Elipay is a Cryptocurrency transfer system developed by Eligma. In May this year, Eligma raised 10 million in their ICO. Eligma can be defined as a blockchain commerce platform that uses artificial intelligence. The company has made it easy for people to transact using Cryptocurrencies, PayPal and credit cards. The firm also makes it easy to for people to start Ebay-type businesses. Those who use system get rewarded with ELI token.