According to its whitepaper, bitcoin is a peer to peer electronic cash system. Early adopters of the technology hoped it would be used as a transaction means across the globe. This has not been the case ten years later. The flagship cryptocurrency has evolved to become a means of storing value and many other different meanings to different people.

This fact has been a gold mine for many bitcoin skeptics often citing it as one of the reasons bitcoin shouldn’t be trusted and why it will soon go down to zero. Well, it is unlikely that the cryptocurrency will go down to zero but still you cannot deny the failure of the adoption goal. There are only a few high street retailers and restaurants accepting bitcoin.

The picture is different online. You will find a long list of merchants accepting bitcoin as well as apps and cards enabling users to spend the currency in their shops where cryptocurrency is not accepted. Bitcoin has evolved to be something else, different from the means of transaction idea that was sold in the beginning.

It has become more than a digital payment system. It has evolved to be a powerful investment asset and a store of value that is resistant to censorship. For the early adopters in the bitcoin industry, it is still a means of exchange. For the true believers however, it’s still the future of money.

Bitcoin has been the best performing asset class for the last ten years. Retail and institutional investors have been showing increasing interest in the asset for investment.

In addition, the number of crypto exchanges and buy bitcoin apps has increased for the last three years. In the same period of time, financial companies have launched bitcoin based programs as an address to the growing demand for digital asset investment.

A report by Grayscale investment says at least a third of US investors are interested in bitcoin. This peaks volumes on bitcoin’s popularity as an asset class.

Bitcoin As A Store Of Value

The decentralized and censorship resistant store of value feature is perhaps bitcoin’s greatest strength. It enables anyone be his or her own bank. And that’s why it’s sometimes known as digital gold, also due to the fact it has similar characteristics with the precious metal.

At the moment there is a little bit of political uncertainty across the world. The US-china trade wars and no deal Brexit are some of the issues of concern. People are scared of another 2008 like recession. They are therefore looking for a safe haven to shelter against such kind of crisis and bitcoin has been the best bet.

Bitcoin may be volatile but its censorship resistance means holders can own the coin and bail in or bank failure can affect its ownership. This is what makes bitcoin truly powerful in the hard economic times. 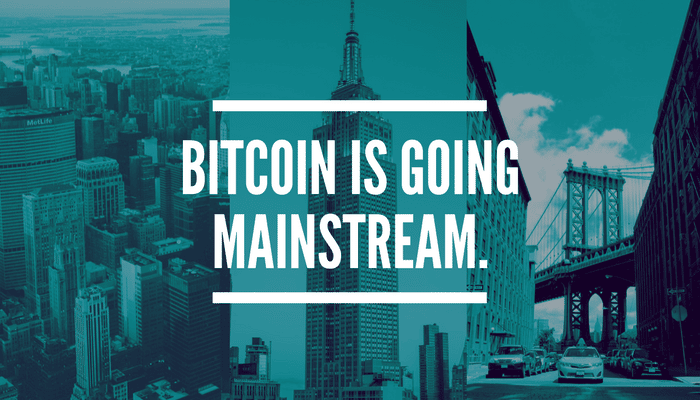 The biggest problem keeping bitcoin from achieving its mainstream status is scalability issues. And the engineers have tried to solve the issue, not once but twice now. The first time being the introduction of the SegWit.

More people flocked into bitcoin and more scaling solutions were needed. That’s where layer 2 solutions like lightning network come in.

If it succeeds, bitcoin could still reach its goal of becoming a globally accepted mainstream currency. The future is still on the horizon.

One thought on “Bitcoin’s Road To Adoption”