At about 08:22 UTC on May 7 on Bitstamp, Bitcoin touched $6,000 for the first time in 6 months raising hopes among Bitcoin enthusiasts that a recovery is in high gear. This sudden spurt begs the question of just how high Bitcoin can spiral given the fact that the price has a long way to go to recover beyond its record $20,089 high of December 2017.

BTC Is Highly Volatile In The Short Term

It is in volatility that bulls gather momentum to break records that can almost never be attained in a stable market condition. In the last 3 days, BTC has been very unstable and at one point sunk below $5,565 on Monday, May 6. However, on Tuesday, May 7, in the morning, the $6,000 target was captured raising optimism that the $6,100 – $6, 200 level of resistance could be realistically breached sooner than expected in perhaps within the week.

The Market Swiftly Corrected The Gains

On the other hand, Coinmarket cap shows that the price never touched $6,000 at 08:12 UTC. In fact, the variance is so great that the data indicates that the price was $5, 940 at the time.

Nonetheless, as Bitstamp shows that bullish forces are weaker on BTC, Coinmarket cap data reveals the exact opposite. BTC is seen gaining tremendously and is $50 short of the $6,000.

The short-term price area of $5700 – $6000 has been very tough for BTC to break out of. The good part of the price set up is that the $5,700 is such a strong level of support that it is highly unlikely that a BTC could slump below the level.

However, since nothing is impossible in the Crypto markets, there could be a slump below the $5700 level of support which could create another crucial level of support at $5, 625, $5,500 and further to $5, 300. 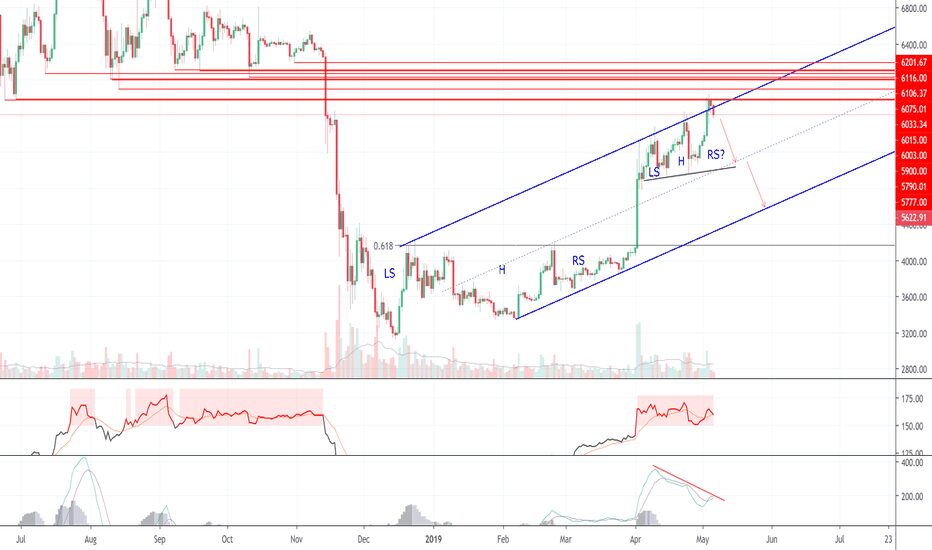 From April 28, the volume has been steadily increasing and hit a high of $18 billion on May 3 before plunging. But since, then, trade volume is on the rise.

The second indicator is the daily RSI. It is oscillating at a 70-74 range meaning that the market pair is overbought. However, the mid and long-term outlooks show a bearish negative divergence which indicates that the market could correct in coming days. Meanwhile, maybe BTC could have consolidated above $6,000.