The hashrate of Bitcoin has reached new highs with more than 68 TH/s during the weekend. Currently, the hashpower has fallen again to 62 TH/s which could correlate with the slightly falling price of Bitcoin. Some people claim that this is a bullish sign for Bitcoin. However, miners are just as much in the dark regarding the future price of Bitcoin as everyone else. Therefore, the hash rate only tells you that more miners than before are currently mining Bitcoin. Previously, the hash rate reached its high in November 2018 when Bitcoin was in the midst of the crypto winter. After that the high consecutively rose although the price had yet to reach its bottom in March 2018. 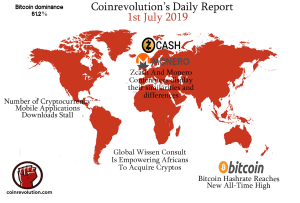 Data form mobile application analytics firm, App Annie, has revealed that 65.8 million crypto related application downloads were recorded in the first six months of 2018. The same period this year, the number rose to 67 million, that is only 1.82% increase in downloads. Experts had predicted that the number of downloads would have increased tremendously owing to the fact that increase in bitcoin prices would encourage more people to use the applications. The growth in downloads is also not as sharp as previously reported in the other years. For example in 2017, 28.2 million app downloads were recorded from 15.3 million in 2016. This is a 45% increase and at the time cryptocurrency and blockchain technology were not as popular as they are today.

Oscar Nwokeji, the CEO of Global Wissen Consult, believes that Africa could greatly benefit by adopting Cryptocurrencies. To drive the adoption, the platform is rolling out solutions that would make it easy for Africans to purchase and hodl Cryptos. The Nigerian, Lagos-based writer, and tech evangelist goes further and discusses weighty factors that should encourage Africans to adopt Digital Tokens as the world positions itself for the 4th industrial revolution that is set to be driven by new technologies such as Blockchain, Artificial Intelligence (AI), Machine Learning, Internet of Things (IoT), Robotics, etc.

Zcach And Monero Conferences display their similarities and differences

On June 22-24, Zcash and Monero conferences were convened. The events were aimed at discussing the future of privacy infrastructure in the context of Cryptocurrency governance and grassroots experimentation of Cryptos. Further, the two conferences showcased the differences between Zcash and Monero that only a small fraction of Crypto enthusiast comprehend. However, details of the two events show that cooperation could be brewing.