Bitcoin has become more involved in US politics than ever before. This week, US Senate candidate Austin Petersen said that he received a Bitcoin donation for his campaign but promptly returned. Brian Forde, a congressional candidate who was once a digital currency director at MIT Media Lab is an ardent supporter of the Cryptocurrency. The involvement of politicians in the virtual currency might be a sign that some are warming to it. 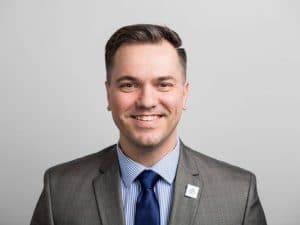 On Saturday, US Senate hopeful Austine Petersen received $130,000 Bitcoin donation but promptly returned it asking the donor to instead donate $5,400 to http://austinpetersen.com/bitcoin. In the Facebook post, Mr. Petersen indicated that they had to reject the donation as it was against FEC regulations. He went ahead to ask the donor to start a PAC or something like that.

Mr. Petersen has been a common figure in liberal circles. He previously worked at Fox where he was producing political shows. He founded The Libertarian Republic, a site that has become so influential in recent years. In 2016, he was in the Libertarian Party’s presidential nomination where he finished third. He is eyeing Missouri’s Republican US Senate nomination that will be held in August. If he wins, he will face Senator Claire McCaskill, from the Democratic Party.

Mr. Petersen is a known supporter of Bitcoin. He has openly embraced it as the money’s future. Last week’s donation is not the only one of its kind to Mr. Petersen’s campaign. Twice before, he has received and returned bitcoins worth thousands of dollars. He is the politician who has received the largest legal Bitcoin donation of about $4,500. ABC NEWS quoted Mr. Petersen’s campaign saying that they are expecting more of these kinds of contributions and donations as the election date nears.

The Use Of Bitcoin In Brian Forde Congressional Race

When Brian Forde announced his candidature for Congress, some of his supporters sent him Bitcoin donations. His opponent immediately branded him a Bitcoin proponent. In response, Forde defended the move by saying that it was an indicator that his supporters have faith in technology. He termed the comments by his opponent against his followers as inaccurate and sensationalist.

Mr. Forde is not new in Cryptocurrencies, as he wrote some of the earliest memorandums on the same for President Obama’s administration. Mr. Forde’s accuser is a former SEC attorney, providing an explanation for the hostility and misconception of financial misconduct. Some of the investors in the Cryptocurrencies that supported Mr. Forde include Mike Novogratz and Winklevoss twins.

Libertarian Party is the most popular third party in the US. Joshua Smith has promised to bring changes to the party by presenting himself as a different candidate from those of the other two main parties. He observes that the current leadership has alienated the Crypto community. He believes the party should look at ways they could turn to the community for fundraising.

Mr. Smith said that there are billions of dollars operating in the Crypto and that most of these investors are very Libertarian-minded people. Associating with the community can help in not only enhancing contribution but also party membership. He said he is already working with prominent players in the sector, such as Nexus and Vector Space Systems and hopes to achieve more if elected as the LNC Chair in the forthcoming party elections.