Bitcoin has broken above the $9000 level and is holding it now for more than 10 hours already. The price broke through to $9400 at peak. Currently the $9000 level acts as a support for the market. The crypto space is celebrating this occurence with the famous “It’s over 9000” meme. In one of our previous analyses we came to the conclusion that Bitcoin’s next level to watch is likely going to be the $9700 level and not the $10000 level which would trigger the market to go higher anyway due to FOMO reactions.

Blockchain platforms such as Ethereum, Cardano, RippleNet, Monero, Dash, Litecoin, Stellar, Tron, etc. have their own on-platform Tokens that are fast emerging as alternative currencies. From the deployment of Bitcoin Blockchain in 2008 during the financial crisis, a lot of negative perception surrounding the leading Crypto and other Altcoins has been paving way for adoption. Consequently, a strong Crypto economy that is controlled by Crypto whales and retail traders who trade amongst themselves in Crypto exchanges is maturing as virtual currencies are increasingly being purchased for investments goals 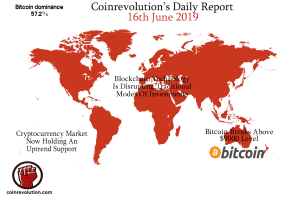 The price of Bitcoin Cash has remained stable above the support levels of $380 and $385 against the US Dollar. The pair of Bitcoin Cash and US Dollar was even able to break a major resistance area before making a stride into a positive zone. Breaking the $400 resistance zone even created opportunities for more gains and the price is now moving towards the $420 price area.