The Bank for International Settlements has declared that it is supporting central banks to launch their own Central Bank Digital Currencies (CBDC). In anticipation of new technologies creating new standards in financial transactions. However, Agustín Carstens, general manager of the Bank of International Settlements (BIS), says that there is currently no demand for CBDCs but that it could come sooner than though. Therefore, he supports the creations of (CBDCs) which are just the digital equivilent of fiat money and explicitly not cryptocurrencies. Carstens is a strong adversary of Bitcoin and altcoins. 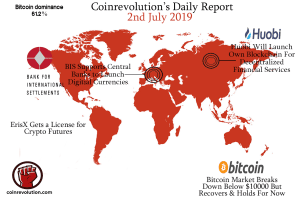 Huobi Will Launch Own Blockchain For Decentralized Financial Services

Huobi follows the step of its competitor Binance and will soon launch its own blockchain. The FinanceChain is conceived to let companies build their own blockchains, launch tokenized assets on the platform and other decentralized financial services. Huobi partners with the blockchain startup Nervos to realize the project.

Bitcoin Market Breaks Down Below $10000 But Recovers & Holds For Now

In the past two weeks Bitcoin has proven that it is still a wildly volatile asset. About ten days ago the price of Bitcoin continued its rally that started respectively in March. The price rose from 9800 USD to about 13,500 USD. Bitcoin marked new yearly highs. However, right now the momentum has turned the other way again. The psychological line of 10,000 USD is currently still tested. It is possible that the downside break of the psychological line could result in a further selloff. Currently, the price of Bitcoin.

ErisX Gets a License for Crypto Futures

According to a blog article from the company that was published on July 1st, ErisX has plans to make it possible for their clients to access digital asset futures contracts on its existing and regulated derivatives market in the cause of this year. Notably, ErisX launched a spot market in April this year and promised its customers to introduce a single digital asset platform that will be specifically tailored to support spot and futures trading. At the time of writing, the spot market exchange owned by the company includes the United States dollar trading pairs with cryptocurrencies such as litecoin (LTC), bitcoin cash (BCH), and Bitcoin (BTC).