Bitcoin has managed to rally over 300% since mid-December 2018 when it was at its bottom most. Other altcoins on the other hand, have continued to wither in valuation throughout the year with the exception of only a few. Very few.

Bitcoin Thrives At The Expense Of Altcoins

A visit down memory lane reminds us that every time bitcoin is in a new bull market, altcoins have suffered. We wouldn’t be wrong if we asserted that bitcoin would gain market dominance at the expense of altcoins.

The truth is, participants in the crypto market sell their altcoins in anticipation of a new bitcoin uptrend. It puts pressure on bitcoin and release pressure on altcoins.

Bitcoin is enjoying the sudden interest in the cryptocurrency. For instance, companies such as WholeFoods and AT&T are now accepting bitcoin. Microsoft, on the other hand, has announced that it is building on the bitcoin blockchain.

Many investors and companies are jumping on the “bitcoin opportunity train”, and nowadays you can find many new services and ways to invest and earn money with cryptocurrency than before. Indeed now you can do cryptocurrency trading, exchange Bitcoin CFD and pay at for your favourite grocery store with Bitcoin credit cards. So the future looks really bright for cryptocurrency owners.

Baakt trading is also set to launch later in the year while Facebook’s Libra project is garnering a fair amount of attention towards bitcoin and cryptocurrencies. Even crypto engine is also participating in getting amount and attention in market.

Bitcoin is enjoying a wave of interest and this has coincided with the bitcoin market cycle. Here are some of the technical reasons that confirm that bitcoin is indeed in a bull market.

The entire price history of bitcoin has taken the flagship cryptocurrency to the extreme highs and lows.

The busts and booms are cyclical in nature and is what you call a market cycle. Now, every bitcoin market cycle has a ranging period, an uptrend as well as a downtrend.

The ranging period is also known as the accumulation phase and is a transitional period where downtrend slows in momentum. It’s when sellers reach a point of exhaustion. Buyers or bargain hunters gather strength throughout the accumulation stage.

Think of a ranging period as a non-trending period time in the market. Now, if a downtrend is where prices decrease and an uptrend where they increase, then a non-trend is where the downtrend culminates in capitulation and price meanders for weeks, months even within a price range before breaching to begin a new uptrend. 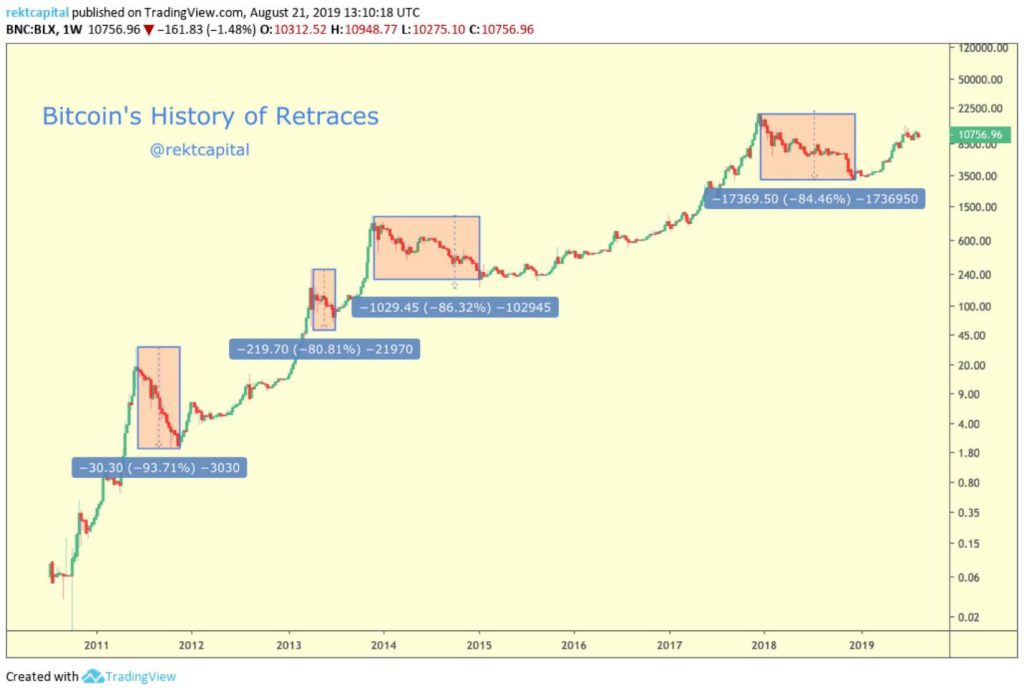 The Beginning Of A New Bull Trend

A range high is an important element of the ranging period and is a level of strong sell-side pressure resistance. Once it’s broken, price begins an exponential uptrend and is the beginning of a new bull trend.

For a ranging period to form however, a downtrend has to come to an end. Deep retracement of bitcoin is not extraordinary. Bitcoin has had quite a few retracement periods, each averaging over 80%. But after a new retracement is a new bull trend.

One thought on “Bears, Bulls And Bitcoin”