The idea of a Universal Basic Income has gained a lot of adherers over the past decade alone. The idea that machines and artificial intelligence become so elaborate that they will replace human workforce is as frightening as it is convincing. It is only logical that UBI projects and crypto come together. Currencies from these projects are dubbed faircoins in the crypto space. One such project that has its own faircoin is called Manna. However, another project that doesn’t even intend to distribute UBI might be competing with and even outperforming any other faircoin project out there.

Only a handful of faircoins seem relevant

There are about twenty to thirty crypto UBI projects. Most of them have not started yet with their distribution, others seem like scams and only a handful has commenced with their distribution. But the only one worth mentioning is Manna. It’s the only crypto UBI project that is listed on coinmarketcap.com and it is the most known project. As Manna made it into mainstream media through its affiliation with Andrew Yang, a contender for the democratic president candidacy who sits on the advisory board for Manna. Manna is by far the most relevant faircoin project.

Not even the biggest crypto UBI project is doing well

The problem that all faircoins share is that they do not attract investors. All of them are bottomless pits. The price will plummet for sure, as everyone is exchanging the currency for fiat/other cryptocurrencies. So virtually no one will want to invest into Manna except maybe for charitable reasons. But although Manna markets itself at times as a charity project aiming to help the disadvantaged and the poor, this is what UBI is precisely not. It wants to distribute money to the poor and disadvantaged as well as to the rich and privileged. So UBI as a charity project is not very effective. Therefore, the only group left to donate are wealthy people that sympathize with the idea of UBI. But if you are wealthy, chances seem high that you approve of capitalism and that you disapprove of Manna with its anti-capitalist rhetoric. From this perspective, it seems suspicious to crypto-enthusiasts that Manna seeks political affiliation. Do the Manna founders approve of the implementation of a UBI by force? Why then bother at all about a faircoin?

The network effect – a viable strategy for a faircoin? 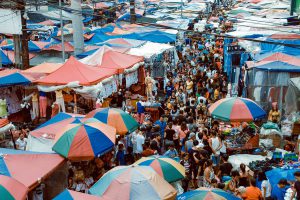 Despite the fact that faircoins will lose their value severely through mass adoption, it is the only option they have left. They have to aim for some kind of network effect as Vitalik Buterin pointed out in January this year. So Manna is expanding its user base through the incentive of gaining more Manna in the weekly distribution. However, this approach is one-sided. To have receiving users is not enough, you also have to have spending users that exchange their faircoin directly for goods and services. The wide acceptance of a faircoin by both buyers and sellers would create the wished network effect. A project that acknowledges this is the UBU project. However, this network is non-existent as of now and it is doubtful whether it will ever achieve a critical size.

IMO the most market-defensible faircoin would be one that gains a competitive advantage over non-fair coins with a similar structure *precisely because* it has a very wide distribution. That is, the "give everyone $5 for free to get network effect" Paypal model.

There is another cryptocurrency that tries to create that network effect by distributing free money. It is doing this way more efficiently though. At least from the user/recipient perspective. Maybe because it’s precisely not marketing itself as a faircoin, but as a legitimate cryptocurrency, a means of payment.  Electroneum has a mining simulator, an app called mobile miner. It effectively does nothing but to initiate your ETN distributions. A good way to create the potential and foundation for a network effect.

In the end, it’s sheer numbers that make ETN more successful than MANNA. The former has a market cap of about $60,000,000 USD, the latter currently slightly less than $350,000 USD. A normal user without referrals receives currently 24 MANNA per month ($0.03), whereas ETN mobile “miners” receive easily 100 ETN per month (though the payout varies depending on different factors). 100 ETN is currently $0,74 USD, a sum that can sadly contribute significantly to your monthly budget if you live in a country where extreme poverty is widespread. Manna announced on the 19th of July that it had 173,635 signed up users, while Electroneum celebrated on the same day that it had passed more than 2 million users.