Another Flash Crash On Kraken Exchange

The crypto exchange Kraken underwent a secoond flash crash after last week. This time it had been even worse than before. While the previous flash crash drove the price down to about $500, the recent flash crash from BTC-CAD (Candian Dollar) went as far down as $100. The price of Bitcoin went down yesterday in general. From about $8500 to $7900. There is much speculation whether or not a whale has caused this recent selloff. 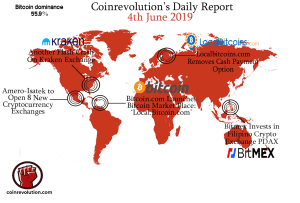 PDAX (Philippine Digital Asset Exchange) is currently the only exchange of its kind that is officially regulated in the South-East Asian state. Bitmex did not disclose the amount of its investment. PDAX offers its customers a variety of tokenised assets and securities.

Bitcoin.com has launched a peer-to-peer market place for both versions of Bitcoin. What is special about local.bitcoin.com is that it does not require KYC information. Something that similar platforms abolished over time. The market place offers several different payment options. 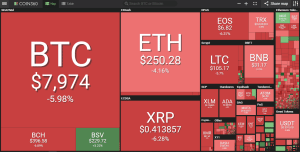 While Localbitcoins received a strong competitor with a similar name, the P2P marketplace has apparently decided to remove the cash payment option from its website. We have discussed this in our recent article on local.bitcoin.com (link above). Localbitcoins cites that it has to react to regulations on anti-money-laundering and anti-terror-financing.

Note on the removal of Local Cash Ads pic.twitter.com/ue2YBYErTY

Amero-Isatek is focussed on investing heavily on the lucrative cryptocurrency industry and it has set its eyes on Mexico. The company yesterday announced that it will set up the first physical exchange station on June 21st at Nuevo Leon, Monterrey. Later on, the company will set up similar stations in seven different locations in Mexico.