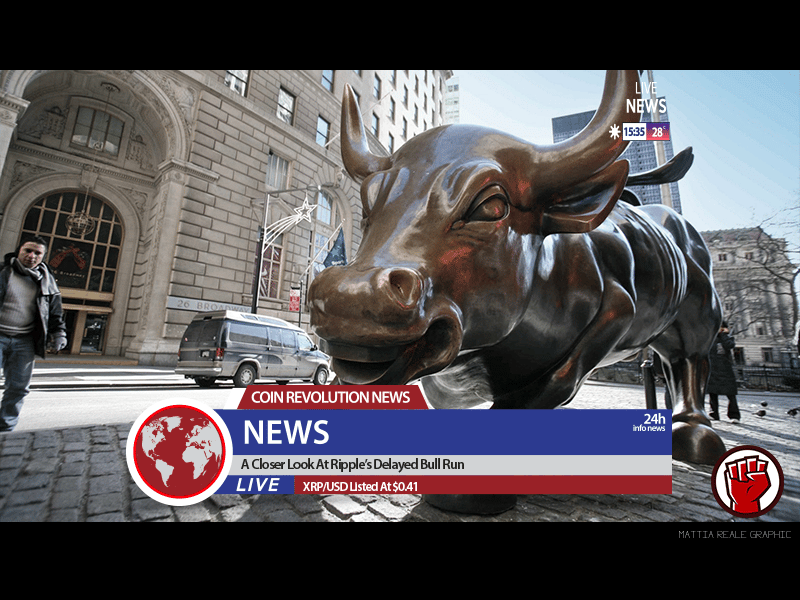 The Cryptocurrency market is in the red after days of pumping that has taken the overall market capitalization from lows of $200 billion only a few weeks back to the current $321 billion.

The consolidation of Bitcoin which has a market dominance of about 61.9% is, therefore, affecting XRP/USD performance and the growth is now stagnated at a close range of $0.40.

Since XRP has been receiving bullish sentiments for the past weeks but a rally is yet to materialize.

Kieran Kelly, an XRP evangelist, and Crypto trader is investigating the factors that are derailing the Ripple bull run.

While Ripple’s Token is underperforming, the XRP/USD pair is more stable compared to other Cryptocurrencies. This is due to the fact that the Ripple growth chart has a trend of its own that is unique and resilient in bearish cycles.

Additionally, with a market dominance of 61%, Bitcoin has an influence over other Digital Tokens and XRP/USD price usually follows the path of Bitcoin. However, XRP has been less volatile lately and its steady trajectory is reinvigorating bullish sentiments.

XRP Hodlers’ Behavior Is Slowing Down The Bull

Some experts believe that the stability of XRP/USD could be attributed to the overall market trend where Altcoins are only impacted by a bearish Bitcoin but fail to surge in a Bitcoin rally.

However, Kieran Kelly has a different perspective as he believes that XRP is not pumping at the moment because hodlers have been churning hypes and short play fake news that is making it hard for the Ripple community to differentiate fantasy and reality. Therefore, most events are not impacting XRP/USD pair and the growth cycle is remaining steady.

For instance, he mentions the recent MoneyGram-Ripple partnership that has not had any impact on the growth cycle of XRP.

Kelly, hence, believes that these short plays are impeding the recovery process as the market is becoming inelastic to key events that can trigger XRP price.

One of the false flags derailing XRP recovery is Sir Gordon Gekko’s forecast of XRP/USD surging to a range of $7 to $10 by July 1.

In the meantime, the RippleNet remains to be popular among players in the financial industry and many Projects are adopting the DLT ecosystem and XRP Token.